The 23rd annual Na Holo Kai Sailing Canoe Race was held on August 21st 2010. The sailing series-leader Olukai team continued it dominance by paddling and surfing their way to a near record winning time across the K'ie'iewaho channel in 7 hours and 13 minutes. With no wind off the start, the team of Tyrus Siale, Scott Wagner,Chris Piko, Butch Keahiolalo, Jason Dameron and Marvin Otsuji battled their way to a lead off of Kaiena Point and the team was never challenged again. The race was the first crossing for Tyrus Siale and Chris Piko , 3rd for Scott Wagner but the 23rd crossing for Marvin Otsuji, who has participated in the race every year since its' inception. Combining the experience of Marvin Otsuji, Butch Keahiolalo and Jason Dameron with the paddling power of Scott, Tyrus and Chris, the team created much too large of an obstacle for the rest of the fleet to overcome. 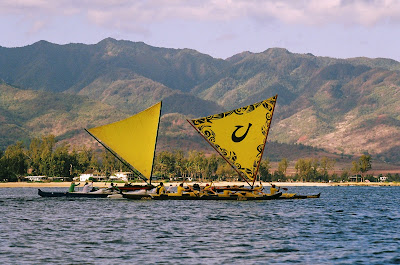 The conditions and directions of the ocean and wind held all 6 team members in the canoe for over 4 hours. At about the midway point between the islands, sheet man Butch Keahiolalo was able to make a few sail adjustments and the excitement began. The 6-to 8 foot seas were stacked up to make the rest of the race extremely challenging. At a couple of points in the latter part of the race, both Marvin and Jason were steering blind and trying not to get pulled out of the canoe. Paddles were lost, hoops and ama's were broken and at times a snorkel would have been the tool of choice. In spite of the paddling over 90 miles and seven hours, each team member is ready to it again. 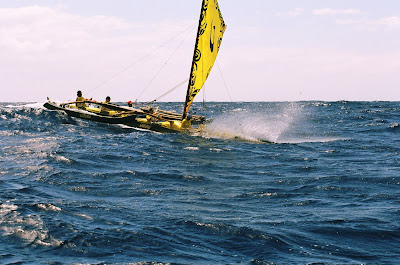 The rest of the fleet made up of canoes from Kauai, Maui and Oahu and were 5 to 30 minutes behind the first place Olukai team at the finish. The last race of the season, the Kendall Pacific, will combine 4 and 6 man sailing canoes, one man and 9 man outriggers , standup Boards and surf ski's. The Olukai team is now positioned to win it's 13th overall Sailing Championship .

The Best Outdoor Slippers for Men and Women

Sign up to join our OluKai ʻOhana and be the...