Hawaiian Sailing Canoe Association race number 3 There's never a dull moment for Team Kamakaoa. The 3rd race in the Hawaiian Sailing Canoe Association series took place on July 10th and 11th. Team Kamakakoa took the early lead to Laau Point, but had trouble steering the boat due to some rigging problems. The collateral damage: 2 broken hoops, a broken hand pump, a bottle cap stuck in the self bailer, 2 paddles lost and had the rigging slip onto the wrong side of the canoe. Despite the mechanical difficulties, the team managed to keep up until the last 1/4 mile. After taking an aggressive line next to the surf, they got pinned in the current against the rocks. All in all, not the smoothest day of sailing, but the team forged on. 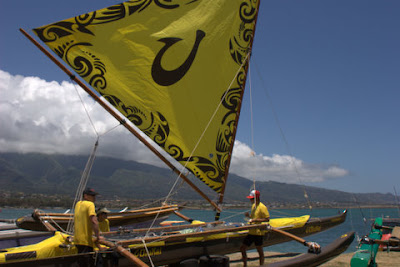 On Sunday, order was restored and a new winning streak began. They established an early lead taking an aggressive line through the surf. Team Kamakakoa hit the wind-line ahead of everyone. Donnie Jones and the Tui Tonga challenged them off Sunset Beach, but the paddlers kicked in and Team Kamakakoa crossed the finish line for the win. Needless to say, after Saturday's challenges, the team was very determined to make a statement! 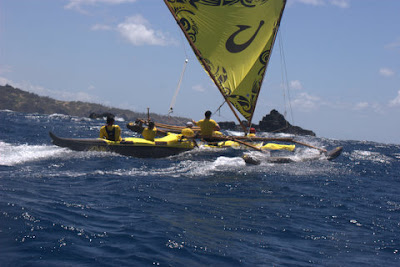